They were many sources of slaves at the time of the advent of Islam,whereas the meaning of manumitting them were virtually nil.Islam changed the way in which slavery was dealt with; it created many new ways of liberating slaves,blocked many ways of enslaving people ,and established guidelines which blocked these means. 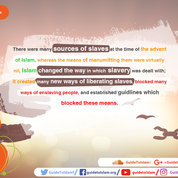